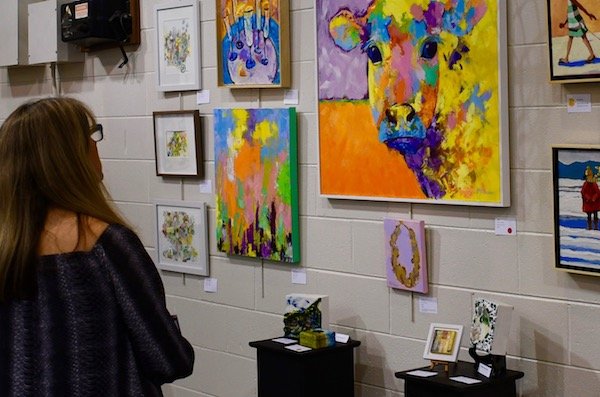 The gym at The New Community School was the home for last year's READ Art Show & Sale. (Photo by Keith Crossman)

On March 22-23, The New Community School transforms its gym into a pop-up art gallery, showcasing the works of both well-known and up-and-coming artists. The 11th annual READ (Raising Educational Awareness for Dyslexia) Art Show & Sale is a fundraiser that presents over 100 local and regional artists all in one space. The North Side school has served fifth- through 12th-grade students with dyslexia and related learning differences since 1974.

This year, the featured artist is Andras Bality, a modern impressionist who received a Pollak Prize from Richmond magazine in 2013.

“As an artist it’s a wonderful opportunity to present work to a large audience who may not otherwise see it,” Bality says.

“Each year we get better and better artwork in terms of variety and talent,” says Jennifer Miller, who plans the event and has two sons enrolled in the school.

While many of the artists exhibit on a large scale, some are less well-known, including Virginia Commonwealth University college students and members of The New Community School’s senior class. That diversity of artists means the show has something for every budget.

The art show includes a ticketed preview event with music from Little Known Legends and food on Friday evening. On Saturday, the sale runs from 10 a.m. to 4 p.m., and admission is free.

“The event has a twofold goal,” explains Dan Stackhouse, director of development at The New Community School. “We are raising money for the school while also highlighting local and regional artists who are doing great work in the community.”

The work of Local Artist, Holly Markhoff comes to Chasen Galleries and will be on view from August 18 through August 31st. Holly's work is expressionism meets figurative with beautiful feminine faces and forms among seas of abstract flowers and homey back drops. 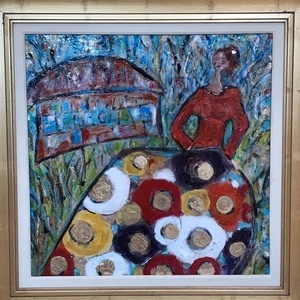 Holly Berger Markhoff art at Stravitz Galleries Through May Influenced by the elongated figures of Modigliani and the gilding of Klimt, her painting incorporates sculptural elements and a variety of mixed media. Acrylic, enamel, and metallic paints are built up between layers of acrylic gloss, creating a glass like coating and translucence.

Markhoff obtained her bachelor of arts degree from Virginia Commonwealth University and has participated in Israeli visiting Artist-Study Intensive, as well as other workshops and programs.

Among the many places her art may be found, in addition to patrons’ homes and corporate collections are in Richmond’s Weinstein Jewish Community Center and Beth Ahabah Museum and Archives.

Season SponsorSwift Creek Mill Theatre is proud to present Holly Markhoff,  a contemporary mixed media artist, as our Featured Artist during the production run of The Little Lion from January 28 through March 5, 2016.  Please join us for a performance of The Little Lion and enjoy Holly’s artwork in The Mill Room during dinner/lunch or during intermission of the performance.  Click Here to read more about Holly and her artist story.

HOLLY BERGER MARKHOFF is a contemporary mixed media artist. Born in New York City, Holly grew    up outside of Washington DC, in Alexandria, Virginia. She currently lives in Richmond, Virginia with her husband, two college age children, and two dogs. She has a studio in her home, and in the city’s Museum District.

Holly’s artistic goal is to create works that are soothing and sophisticated, yet express an inspiring playfulness and joy. Her paintings are often large, colorful and glossy having evolved to incorporate sculptural elements and mixed media. Papers and fabrics are at times mixed with layers of gloss varnish, acrylic, enamel and house paints. A heating element may be used to seal and texturize. Paintings can be spontaneous and simply directed by the materials used. More often pieces continue the process of completing the expression of a recurrent sketch or theme. Holly’s work can be seen in corporate collections throughout the state of Virginia and in private collections nationally and internationally. Please find her on the web at www.HollyMarkhoff.com

As a side note, Holly was involved in theater arts as a teenager and child, including productions at the Little Theatre of Alexandria, and as a member of a touring pantomime group, which put on over 40 shows in one summer! Holly is honored to have her work shown in the renowned Swift Creek Mill Theatre, coinciding with the esteemed stage debut of Little Lion!

For More Information about Holly visit her website www.hollymarkhoff.com 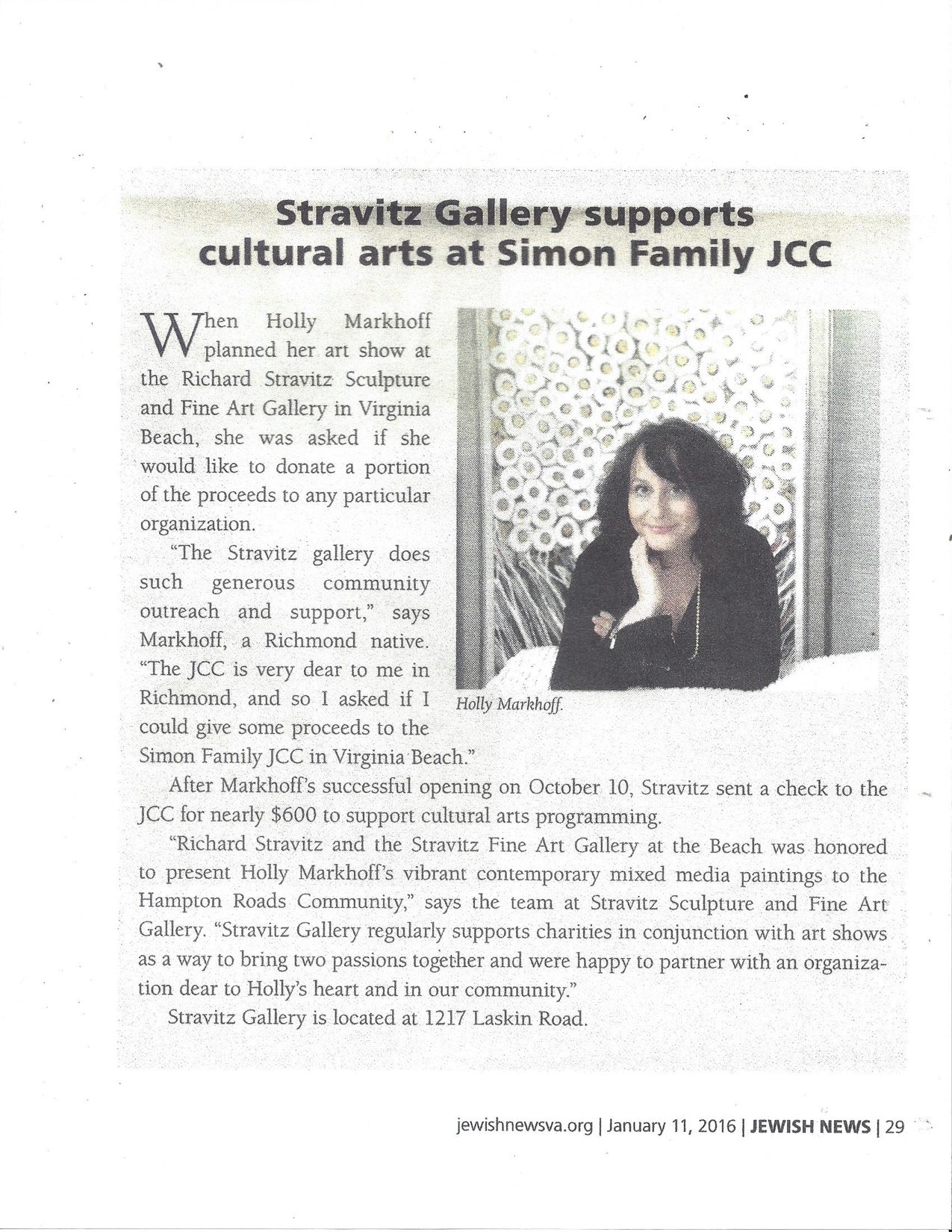 This February, Gallery 66 NY will participate in the village’s daylong Winter First Friday, sponsored by the Chamber of Commerce. As part of the festivities, Gallery 66 will have the public create a piece of art with “snowball pigment throws” from 4 to 6 p.m., Feb 6. For a list of the activities throughout the day, visit the Facebook page of the Cold Spring Area Chamber of Commerce.

The opening reception of Show the Love will follow at 6 p.m., featuring 30 artists who live and work in Cold Spring, including Thomas Huber, whose unrelated drawings and imagery utilize natural and biological forms; Russ Ritell, whose social and political graphic work of the punk scene creates a raw edginess in his paintings; Richard Bruce, whose paintings reflect the essence of nature and its abstractions; and works of Carl Van Brunt using digital fractal repetition to create otherworldly abstract images.

All 30 artists, in keeping with the “love” theme of February, will feature works that celebrate the “rouge” tones of red, purple and pink.

The month of love is also celebrated in the back gallery with Puttin’ on the Ritz, paintings by Holly Markhoff. Through her use of acrylic, oil or mixed media with paints, paper and layers of gloss, she creates a translucent glassy effect with many of her paintings. 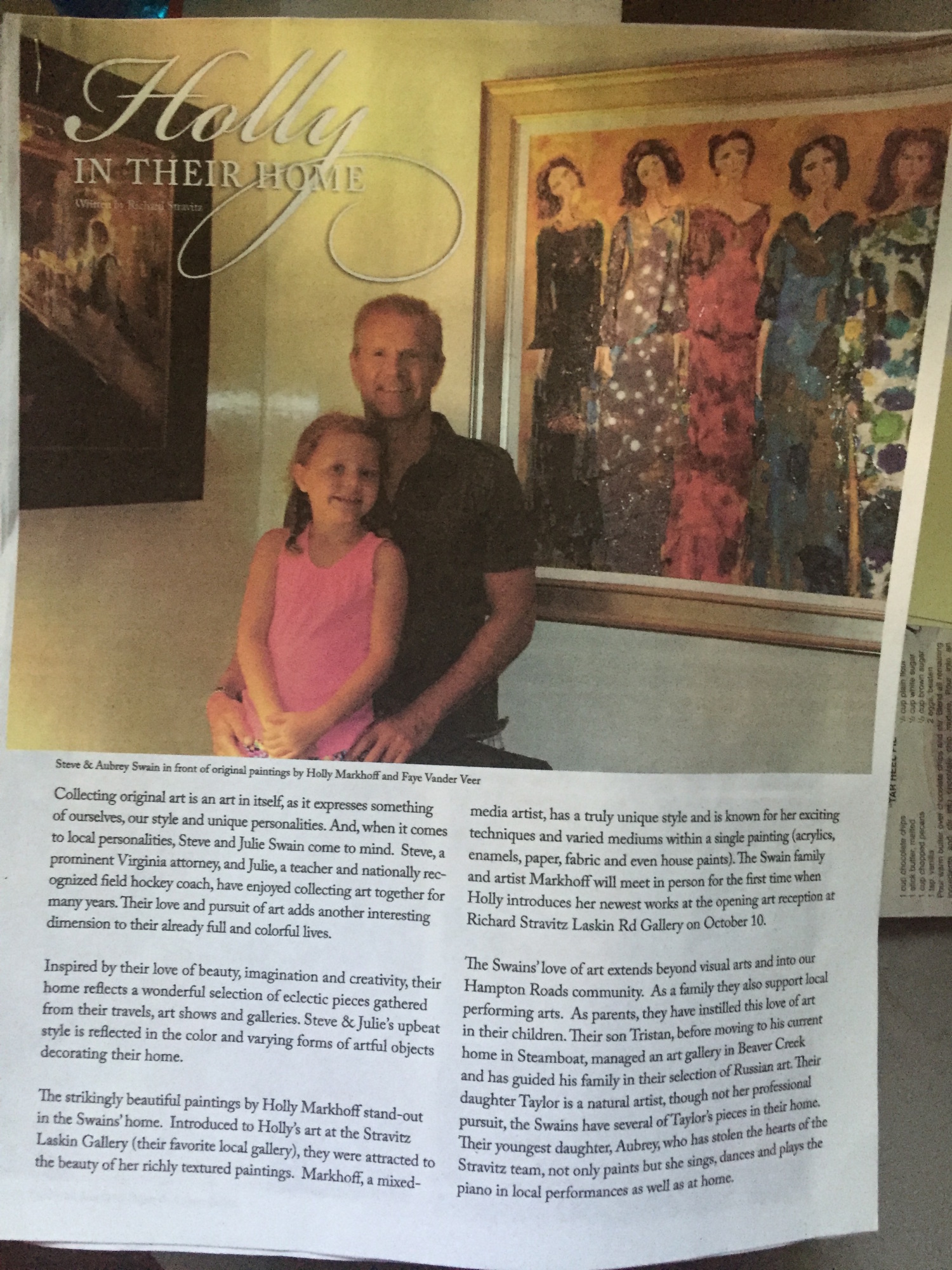 We are seeing a rise in the purchase of representational abstracts. This genre of painting can be executed in many types of medium. It is most often indicated as mixed media because it frequently makes use of various elements. Two noted artists in our gallery that produce exceptional representational abstract paintings have garnered impressive followings with artwork that is sought after across the continent. They are, V Noe – of the colorful landscapes, and Holly Markhoff – of the elongated women and vivid floral patterns.  Vivian Noe will be one of the featured artists in June at our Laskin Road location, along with Steve Griffith, who is famous for his lush impressionistic gardens.  Holly Markhoff will be featured in October at our Laskin Road location, along with a surprise celebrated artist from Russia. (Think angels) and stay tuned.